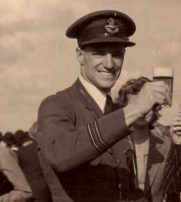 Pilot. Born at Reynella, South Australia. He came to England in 1929 (or 1921, see below) and studied at Oxford. He became a test pilot for Hawker's and in 1940 was attached to 43 Squadron. On the 7th September at approximately 5.00 p.m. he was shot down over Greenwich. He was blown out of his Hurricane, but his parachute failed to open. The plane itself broke into three pieces, with the engine going through the roof of St Ursula’s Convent, setting the building on fire.  Our information is from the Greenwich Phantom.

It would be nice to know if his surname's closeness to the name of his place of birth is coincidence or if he took the name for some reason - see below for the answer.

Andrew Behan kindly provides the additional research: He married Enid Marjorie Allen (1914-2006) on 24 September 1938 at St Giles Church, Stoke Poges, Buckinghamshire and they had one son, John Richard Carew Reynell (1939-1973). The 1939 England and Wales Register shows them living at The Old Forge, West End, Chobham, Surrey. When he died, aged 28 years, he was buried in Plot 56, Grave 202417, St Bartholomew's Avenue, within the Brookwood Military Cemetery, Woking, GU24 0BL. Probate was granted to both his widow and Philip Gadesden Lucas, a chief test pilot, on 3 May 1941. His effects totalled £1,773-16-10d. He is also commemorated on the Battle of Britain Monument, Victoria Embankment, London and also on the World War II memorial at Balliol College, Oxford, on the East Wall of their Chapel Passage.

Andrew adds: "My research discovered that he, along with his widowed mother and elder sister - Lidia, were on the passenger list of the 'Markunda' steamship of the Peninsular and Oriental Steam Navigation Company Ltd when it arrived at Tilbury on 16 April 1921 having boarded at Adelaide, Australia. He was recorded as aged 9 years.

This section lists the memorials where the subject on this page is commemorated:
Flight Lieutenant Richard Carew Reynell

British field marshal, served in India and the Boer War. Born India to an Iri...