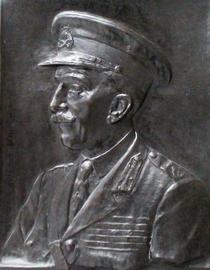 Prominent General in WW1 who visited Northern Ireland in March 1922 and spoke his mind on the Irish situation. On 22 June he unveiled the Liverpool Street Station war memorial and then went home to 36 Eaton Place, where he was gunned down on the doorstep, shot in the back nine times. Irish terrorists were suspected and on 18 July that same year IRA gunmen Reginald Dunne and Joseph O’Sullivan were sentenced to death at the Old Bailey. (Wilson's home address is taken from the Oxford Dictionary of National Biography, other sources vary.)

2022: The Guardian reported: "On Wednesday {22 June 2022}, precisely a century later, Wilson will get his own plaque at a ceremony in the House of Commons, adding him to memorials for other MPs who died violent deaths, including Jo Cox."

This section lists the memorials where the subject on this page is commemorated:
Field Marshal Sir Henry Wilson