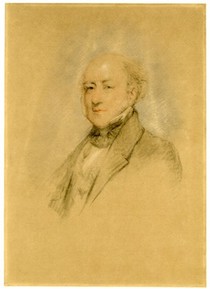 Collector of glass, books and engravings funded from the wealth he inherited from his father. Member of the Society of Antiquaries, he endowed 3 Slade Professorships of Fine Art at universities, and also founded the Slade School of Art.

Never married. Lived with his similarly solo brother, William, in the family home in Walcot Place. From a very informative article in Friends of West Norwood Cemetery we learn: "The family lived at 24 Walcot Place (East Place). Felix was born there and remained there until he died. The house was on the corner of Walnut Tree Walk {SE11, near the Imperial War Museum} and Walcot Place; it no longer stands and the site is occupied by a block of flats called Culpepper House, Walcot Place now forming part of Kennington Road." We think this is the Edwardian red brick block though this and the modern block to the south of the junction both seem to be called Culpepper Court.

That quote suggests that Slade belongs on the list of people who were born and died in the same building - see Doubleday.

Bequeathed most of his art collection to the British Museum.

This section lists the memorials where the subject on this page is commemorated:
Felix Slade

On a nearby information board: Slade Fountain – This drinking fountain was in...

Painter and etcher.  Born  Dumbarton,  Aged 17 came to the Slade School of Ar...

Painter. Born in Water Lane, Blackpool, Cork, Ireland. He studied in Italy an...