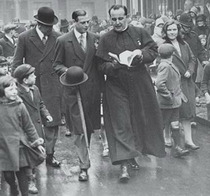 Anglican vicar.  Born Sussex, his father being a cousin of Lord Jellicoe. Worked in the slums of Somers Town, north London in the 1920s. He set up the St Pancras House Improvement Society and persuaded Edward, Prince of Wales to become its patron. Died Uxbridge.

London Details has a good post on the Sidney Estate, the Jellicoe project where these lovely finials were erected.  And Ornamental Passions has some good photos of the ceramic lunettes.