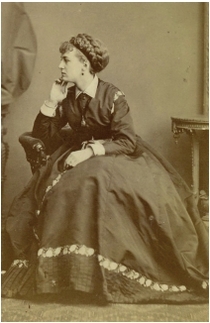 Born at Kings Road, Tottenham. Boulton's cross-dressing began very early and his parents seem to have accepted it. From 1867 Stella and Fanny would appear at private clubs around the country and were seen in public places around Mayfair. Their imprompu audience often paid for the fun so they were effectively busking.

In 1871 they survived a trial during which they were mainly supported by a highly entertained public. Boulton’s lover, Lord Arthur Pelham Clinton, ex-MP for Newark, was required to appear at the trial but either died or fled abroad instead.  His Wikipedia entry raises more questions than it answers.

Limerick from the time:
There was an old person of Sark
Who buggered a pig in the dark;
The swine in surprise
Murmured: ‘God blast your eyes
Do you take me for Boulton or Park?

Neil McKenna (who unveiled the plaque with panache), the author of 'Fanny & Stella', has published a number of photos on his website which is where we found our two pictures. Interestingly, these cross-dressers would also pull a double-cross and dress as men, to an equally entertaining effect.

This section lists the memorials where the subject on this page is commemorated:
Ernest Boulton