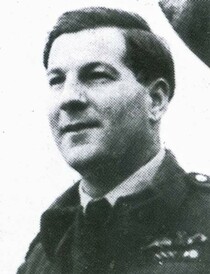 Wing Commander Ernest Ralph Bitmead was born in 1913, the second of the seven children of Ralph Bitmead (1885-1961) and Naomi Bitmead née Dodd (1890-1974). His birth was registered in the 2nd quarter of 1913 in the Wallingford registration district, Berkshire (now Oxfordshire), and his father was a farmer.

He was listed as a probationary Midshipman in the Royal Naval Reserve with effect from 1 January 1930 and joined the Royal Air Force, service number 34139, in March 1934. Our Picture Source gives details of life and career as does the American Air Museum in Britain website. These confirm that he served as the Squadron Leader of No.71 Squadron from 14 August 1941 for about one week. On 21 November 1944 he was listed in the London Gazette as an Acting Group Captain and was awarded the Distinguished Flying Cross.

Telephone directories from 1953 listed him as Wing Commander E. R. Bitmead at Rose Farm, West End, Flax Bourton, Somerset. Probate records showed his home to be Rose Farm, West End, Nailsea, Somerset and confirm that he died, aged 42 years, on 17 December 1955 at The Manor, Cholsey, Berkshire. When probate was granted to his widow on 6 April 1956, his effects totalled £3,075-15s-1d.

He was cremated at Headington Crematorium, Bayswater Road, Headington, Oxford, OX3 9RZ and his name is also shown on the Battle of Britain London Monument, Victoria Embankment, London, SW1.

This section lists the memorials where the subject on this page is commemorated:
Ernest Bitmead

Naval officer and administrator.  Died of typhus at home in Lime Street.  Som...

The first portable automatic machine gun. In the 1888 photograph the Prince ...