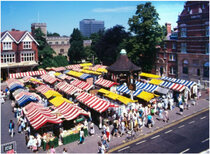 From Wikipedia: "In 1303, Edward I granted a charter to Humphrey de Bohun, and his wife to hold a weekly market in Enfield each Monday, and James I granted another in 1617, to a charitable trust, for a Saturday market. The Market was still prosperous in the early eighteenth century, but fell into decline soon afterwards. There were sporadic attempts to revive it: an unsuccessful one of 1778 is recorded, and in 1826 a stone Gothic market cross was erected, to replace the octagonal wooden market house, demolished sixteen years earlier. In 1858, J. Tuff wrote of the market "several attempts have been made to revive it, the last of which, about twenty years ago, also proved a failure, It has again fallen into desuetude and will probably never be revived".

However the trading resumed in the 1870s. In 1904 a new wooden structure was built to replace the stone cross, by now decayed. The market is still in existence, administered by the Old Enfield Charitable Trust.

Our picture source, the Enfield Society, has more details and images.

This section lists the memorials where the subject on this page is commemorated:
Enfield Market

In the 19th century there was an extensive general market for butchers' meat ...

An urban regeneration scheme. The aim was to develop the arts and shopping ar...

Alannah Elizabeth Weston was born in January 1972 in Dublin, Ireland the daug...