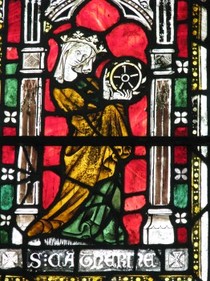 Maud / Maude / Matilda was the daughter of King Henry I. Married aged 12 to the future Holy Roman Emperor, Henry V, she moved to Germany and then Italy. When her husband died, 1125, her father moved her to Normandy to marry Geoffrey of Anjou.

On the death of her only sibling, William Adelin, her father named Matilda his successor but on his death Matilda's cousin, Stephen of Blois, claimed the throne. Battles ensued lasting almost 20 years, with Matilda in the combat headquarters, directing the campaign. She won sufficiently to make arrangements for her coronation at Westminster, in 1141, but a mob of Londoners, who supported Stephen, ran her out of London. She eventually left for Normandy where she stayed and finally died but her eldest son, by Geoffrey, did achieve the crown in 1154 to become Henry II.

Self-titled 'Lady of the English', had she been crowned she would have been England's first ruling queen. All English monarchs since 1154 have been descended from Matilda.

This section lists the memorials where the subject on this page is commemorated:
Empress Matilda / Empress Maud