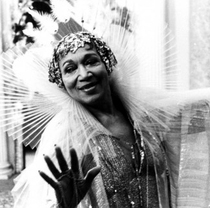 Singer and actor. Born Elisabeth Margaret Welsh at West 61st Street, New York. Her career started in the chorus of 'black' Broadway shows. She was promoted to solo roles and travelled to Paris in the show 'Blackbirds'. Her meeting with Cole Porter led to her appearing in 'Nymph Errant' in London, and she was one of the first artistes to appear on British television. She remained in Britain during World War II entertaining the troops. After the war she appeared in many west-end shows. Died at Denville Hall retirement home for actors and entertainers, Northwood.

This section lists the memorials where the subject on this page is commemorated:
Elisabeth Welch

A Tuesday night club that attracted students from two nearby art colleges: Ce...

Three members of the group: Barry Gibb and his brothers, the twins Robin &amp...