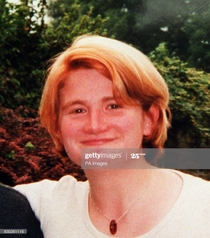 Andrew Behan has kindly carried out further research: Elaine Clair Kellow  was born on 13 September 1975 in Venezuela, the daughter of Robin and Diana Kellow. She was a single woman who worked in information technology and lived in a three bedroom flat in Exeter House, Hallfield Estate, Paddington. She died, aged 24 years, on 5 October 1999 when she was travelling aboard the 8.06am Thames Trains Turbo train from Paddington to Bedwyn, Wiltshire, when it collided with the 6.03am First Great Western High Speed Train from Cheltenham Spa, Gloucestershire to Paddington at Ladbroke Grove. The subsequent inquest was informed that she thrown from the rear coach and crushed by another carriage. She was the only person in the rear coach of the Thames train to die and was identified by jewellery and a leg support.

This section lists the memorials where the subject on this page is commemorated:
Elaine Kellow