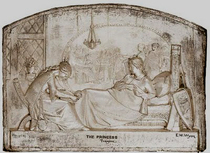 Sculptor. Born Edward William Wyon in Christchurch, Surrey, into a family of die-casters and medallists. Brother to Thomas. He exhibited frequently at the Royal Academy and received numerous commissions for portrait busts. He executed reliefs for the Drapers' Hall, London and two caryatides for the Fitzwilliam Museum, Cambridge. We can't find an actual picture of him, so have used his engraving for Tennyson's 'The Princess'.

This section lists the memorials created by the subject on this page:
Edward William Wyon

Sculptor active in 1984. We can find no information so we need to check our t...

Works include: statues and plaques for the shrine-like reredos in St Mary‘s C...

Sculptor whose London works include: the wonderful bronze doorway of the P&a...