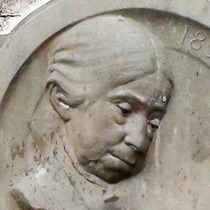 The first woman to serve on the West Ham council and an advocate of welfare for women and children. Was offered the Mayoralty but in view of her advancing years and increasing deafness she declined to take it. Made honorary freeman in 1936 (after her death, which seems a bit odd).

Researching Kerrison we discovered that when the first woman Mayor in West Ham, Daisy Parsons, was elected the Stratford Express, 9th November 1936, reported one dissenting voice: “Alderman Rumsey; He was sorry to see the day when a woman was to occupy the chair (Shame) When a town hands itself over to petticoat government it is always in trouble. If the man is not the master in his own house he is in for a bad time. The woman wears the trousers. You were told by the mover of the resolution what wonderful things the lady had done, but she did not mention any of them. I do not know of one thing in the borough which ever came from this lady’s brain. The Alderman said he had come up against two or three lady Mayors during his mayoralty and he had to say they were absolute failures. A woman mayor was out of place. She was alright for exhibition purposes but for business it was not in the best interests of the town to have a woman mayor. This council chamber is deteriorating, and I wish I had got out of it before ever I saw a woman occupying that chair.”  Hats off to Daisy for standing up to him! Go, Daisy, go!

We published the above information in February 2012. Andrew Behan has now (October 2020) provided further research on this lady as follows:

Born as Sophia Edith Kerrison in Welshpool, Montgomeryshire (now Powys), Wales, her birth was recorded in the 4th quarter of 1850. She was the eldest daughter and second of the five children of Henry Kerrison (1819-1900) and Sophia Caroline Kerrison née Jones (1825-1913). Her father was an annuitant, living on his own means according to the 1851 census that also shows her living with her parents, an aunt and four cousins at the home of her maternal grandmother at Gungrog House, Gungrog, Welshpool, where there were also three female domestic house servants.

It would appear that she reversed the order of her forenames by the time of the 1871 census that now listed her as Edith Sophia Kerrison and shows her living with her parents and sisters at High Street, Moreton-in-Marsh, Gloucestershire and that her father was recorded as 'Independent Minister of Moreton-in-Marsh'.

The 1901 census gives her name as Edith S. Kerrison and shows her living at 61 Ravenscroft Road, Canning Town with three boarders. Her occupation was shown as Hospital Matron (Retired). She was still at this address at the time of the 1911 census which showed her name as Edith Kerrison and listing her occupation as Private Means. There was just one boarder but also one female domestic servant.

The 1922 edition of Kelly's Essex Directory lists her among not only the county's Justices of the Peace as Miss Edith Sophia Kerrison at 61 Ravenscroft Road, Canning Town, E.16, but also as a councillor for the Tidal Basin Ward in the County Borough Council of West Ham. The 1925 edition shows her still as a J.P. but that she was now one of the councillors for the Beckton Road Ward along with Daisy Parsons.

The Edith Kerrison Nursery School and Children's Centre, Sophia Road, Custom House, London, E16 3PB was founded by her in 1930.

She died, aged 84 years, on 13 October 1934. Probate records confirm that her home address remained as 61 Ravenscroft Road, but that she died in Woodford, Essex. Her effects totalled £1,577-16s-7d.

This section lists the memorials where the subject on this page is commemorated:
Edith S. Kerrison