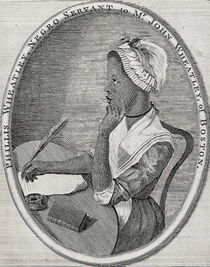 American writer who was the first African-American author of a published book of poetry.

Her name can also be given as Phillis Wheatley Peters or Phyllis or Wheatly. Born in West Africa, she was sold into slavery at the age of seven or eight and transported to North America, where she was bought by the wealthy Wheatley family of Boston. Unusually the family educated her, not just to read and write, but in the classics.

1773 she came to London with her master's son, seeking publication of her work. 'Poems on Various Subjects, Religious and Moral' was published that year by A. Bell, and brought her fame in Britain and the States, and freedom. The Wheatleys emancipated her and when they died shortly after, she married a poor grocer, a free black man, John Peters, lost three children, and died in poverty and obscurity at the age of 31.

An example of her work:
Twas mercy brought me from my Pagan land,
Taught my benighted soul to understand
That there's a God, that there's a Saviour too:
Once I redemption neither sought nor knew.
Some view our sable race with scornful eye,
"Their colour is a diabolic dye."
Remember, Christians, Negroes, black as Cain,
May be refin'd, and join th' angelic train.

This section lists the memorials where the subject on this page is commemorated:
Phillis Wheatley

On this site in September 1773, A. Bell Booksellers published a volume of poe...

Working-class suffragette from Manchester, member of the WSPU and one of the ...