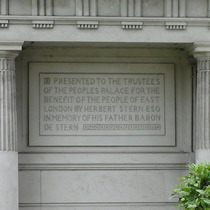 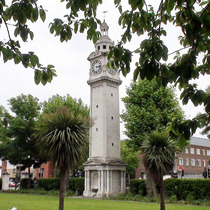 {On a large stone plaque on the west side:}
Presented to the trustees of the People's Palace for the benefit of the people of East London by Herbert Stern Esq. In memory of his father Baron de Stern.
{On the north side:}
MDCCCXC {Roman numerals for 1890}
{On the east side there is a relief showing a seagull-like bird flying in front of a coastal sunrise (or sunset - how can one tell?) with the words:}
Time trieth troth

Ornamental Passions has a photo of the seagull relief and explains that "Time trieth troth" "was used often to describe the plight of the Jacobites in their weary and fruitless wait for the return of the Stuarts" though that information brings OP no closer to explaining the proverb's presence here. This prompted us to have another go ourselves and discovered that there is a 12-line section of Shakespeare's "As You Like It" that refers to this motto, to birds and to the bay of Portugal (towards the end of Act 4, scene 1) . Given Stern's Portuguese links this seemed relevant but we've examined the text and can see no connection. So the puzzle remains.

The north and south sides of this tower each provide a (now non-working) drinking fountain.

Edward Robert Robson was the architect for the People's Palace and so presumably this tower is also of his design.

This section lists the subjects commemorated on the memorial on this page:
Baron de Stern clock tower

Born Frankfurt, moved to London by the 1840s where he joined his brother Davi...

This section lists the subjects who helped to create/erect the memorial on this page:
Baron de Stern clock tower

Son of Baron de Stern. Started in his father's banking business but left in a...