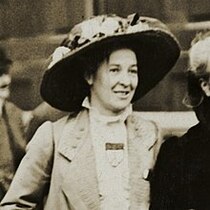 Member of the Women's Social and Political Union. She was arrested in 1906 for attempting to make a speech in the House of Commons. This was one of the first acts of suffragette militancy. She met Margaret Sanger in 1915 and they organised the 1927 World Population Conference in Geneva. How-Martyn toured India talking about birth control. She had no children and died in Australia. The photo shows How-Martyn in 1914.

This section lists the memorials where the subject on this page is commemorated:
Edith How-Martyn

Early campaigner for women’s rights, particularly the rights of workers. An e...