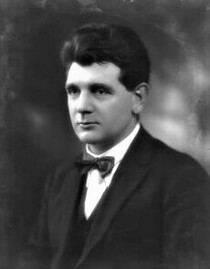 Despite the claim on his Wikipedia page that he was born on 3 April 1887, this was not the case. He was the fifth of the twelve children of George Lansbury (1859-1940) and Elizabeth Jane Lansbury née Brine (1860-1933), his birth being registered in the 2nd quarter of 1887 in the Poplar registration district. He was baptised on 3 April 1877 at St Stephen's Church, Tredegar Road, Bow, where the baptismal records show his date of birth as 24 February 1887, that the family resided at 105 St Stephens Road, Bow, and that his father's occupation was a veneer drier.

When his four youngest sisters were baptised on 17 May 1902 at St Mary's Church, Straford, Bow, the baptismal records show that the family were living at 42 Campbell Road, Bow and when his youngest brother Eric George Lansbury (1905-1965) was baptised at the same church on 14 May 1905 the family were residing at 103 St Stephens Road, Bow.

When the 1911 census was taken, he was described as a timber merchant living in 11 rooms at 101 & 103 St Stephens Road, Bow, with his parents and five siblings: Annie, William Arthur, Dorothy, Daisy Beatrice and Nellie. His father was shown as a timber & veneer merchant and a Member of Parliament.

His wife died on 1 January 1922 and he was re-married in the 3rd quarter of 1924 in the Holborn registration district. His new wife was born as Charlotte Lilian McIldowie (1895-1975) in Belfast, County Antrim, Ireland. She had married a Reginald Harry Francis Denham (1894-1983) in the 2nd quarter of 1919 in the Wandsworth registration district and they had a daughter, Islolde Denham (1920-1987), but were divorced in early 1924. She was an actress who used the stage name of Moyna Macgill.

This section lists the memorials where the subject on this page is commemorated:
Edgar Issac Lansbury

Co-funder of the Reagan statue; trustee of the Heritage Foundation, an Americ...

In 1961 Mayor of Clichy, France, and Vice-President of the General Council of...