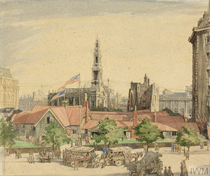 From Heritage Images (link now dead): "The Eagle Hut was designed as a centre for soldiers on leave in London during the First World War, providing accommodation and food. A group of soldiers, including Americans, can be seen on the pavement outside."

First World War.com also provides interesting information: "Operated by the Y.M.C.A. the centre, staffed by some 800 voluntary personnel, offered overnight accommodation and food for American servicemen passing through London. The centre additionally helped with arrangements for London sightseeing tours and entertainment. Turnover was heavy: in February 1919 alone 134,566 meals were served. Many other such centres were operated worldwide, each funded through a combination of public government and private subscriptions."

2017:  Criterion Auctioneers, our Picture source, sold a knife made from zeppelin debris and inscribed "To Mrs Frederick Braund. A remembrance from workers at The Eagle Hut, Strand, October 1918."

This section lists the memorials where the subject on this page is commemorated:
Eagle Hut

From Yorkshire. MP for Scarborough and then Knaresborough. Colonel of a regim...