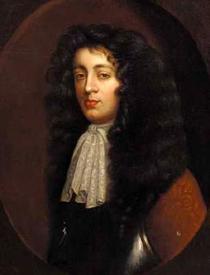 Born James Scott (or Crofts or Fitzroy) at Rotterdam. Illegitimate son of King Charles II and Lucy Walter. He came to England in 1662 where he was created Duke of Monmouth. At the death of Charles II, he landed at Lyme Regis, raised a fighting force,and at Taunton, declared himself as King James II, to the displeasure of the real King James II. He was captured and returned to London where he was beheaded on Tower Hill. A grim little story says that after his death it was discovered that no portraits existed so his head was stitched back on his body and a painting made, possibly the one of a man, once identified as Monmouth, lying down with his eyes shut.

This section lists the memorials where the subject on this page is commemorated:
Duke of Monmouth

A.D. MMIX This building stands on the site of the former coach-house of Monmo...

Simon of Sudbury, Archbishop of Canterbury

Archbishop of Canterbury and Lord Chancellor of England.  In the latter role ...