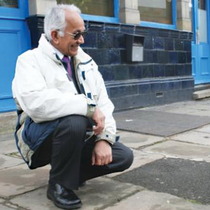 Camden's chief engineer and assistant director of environment: 1966- 2001 when he retired.

From the Burghers In The UK website we learn that he was born on 12 April 1935 in Colombo, Ceylon (now called Sri Lanka).

The BBC website confirms his full name as Dugald Trystan Julius Herber Gonsal and that he was made an Officer of the Most Excellent Order of the British Empire (OBE) in the June 2000 Queen's Birthday Honours List for services to highway and civil engineering. However, we believe that they may have shown his fourth forename incorrectly as Herber, whereas the Descendants of Arnout Caspersz & Gertruida Aldertsz genealogy website show the spelling as Herbert.

Electoral registers in 1965 show him living at 58 Warden Avenue, Harrow, with his wife. Also shown on the register was his brother Russell and sister Rowenna. Telephone directories in 1968 list him still at this address, but those in 1980 and 1982 show him at 337 Torbay Road, Harrow.

His second marriage was to Juliana Rosina Harriet Manley in Camden. She was the daughter of Samuel & Mary Manley and she had been born in Barnstaple, Devon.

This section lists the memorials where the subject on this page is commemorated:
Dugald Trystan Julius Herbert Gonsal OBE

Maiden Lane Bridge First built in 1819 to carry Maiden Lane across the Regen...

"Kingschoole" refers to the passage of the Tyburn river through the grounds o...