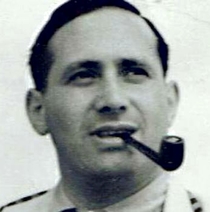 Pathologist. He was involved in founding haematology (the study of blood) and was a pioneer in the investigation and treatment of blood diseases. In the 1940s he established the Journal of Clinical Pathology, and in 1963 helped found the Royal College of Pathologists. In a completely different field, he captained the British fencing team at the 1964 and 1968 Olympic Games.

Our colleague Andrew Behan has added: His dates of birth and death and his full name of Aaron Gordon Signy.

This section lists the memorials where the subject on this page is commemorated:
Dr. A. Gordon Signy

Doctor. Born at 41 Hanbury Street, Spitalfields. Qualified as a doctor in 192...

Redesign and re-opening of Memorial Park at Guy's Hospital

Chairman of the Board of Guy's Hospital in 1964. Born London.

The Bromley by Bow Centre grew out of a church group.  In 1997 they opened th...