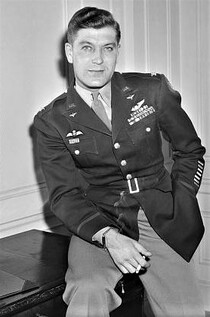 On 13 September 1940 he enlisted in the Royal Canadian Air Force in Ontario, Canada, and came to England on 15 May 1941. He was assigned to their No. 401 Squadron from November 1941 to June 1942 at RAF Biggin Hill. and from June to September 1942 he served as the Squadron Leader in the Royal Air Force's No.133 Eagle Squadron at RAF Debden. Our Picture Source and his Wikipedia page gives full details of his service and private life.

He died, aged 90 years, on 3 September 2008 in Miami, Miami-Dade County, Florida, USA. He was cremated and both he and his wife's ashes were interred in Section 8-11, Row 17, Site 1, in the Arlington National Cemetery, 214 McNair Rd, Arlington, Virginia, USA.

This section lists the memorials where the subject on this page is commemorated:
Donald Blakeslee

Wing Commander Ernest Ralph Bitmead was born in 1913, the second of the seven...

Andrew Behan has researched this man: Inspector Stephen John Dodd was born on...