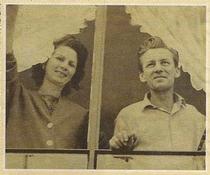 St Pancras Rent strike: In 1960 the Tory council of the old borough of St Pancras (now part of Camden) attempted to impose large rent increases. The tenants, the generation who had fought in WW2, rebelled en masse.

Don and Edie met at work at a gun-sight factory near the Prince of Wales Road. They married but were soon separated as Don enlisted and went off to war. In 1949 they were given a flat in Kennistoun House where they lived happily until receiving the large rent demand which Don decided not to pay, as did Arthur Rowe from the Regent’s Park estate. By January 1960 more that 1,000 were on rent strike. The council countered with the threat of eviction which prompted another 2,000 tenants to strike. In preparation for a battle flats were barricaded and barbed wire positioned on the roof. On the morning of 22 September the police and bailiffs stormed the flats. Arthur Rowe was quickly overcome but Don and his colleague Jimmy Peters held out much longer. They were eventually taken but their stand prompted other protests: the workmen at the Shell Centre building site marched out and hundreds of workers at the Camden Goods Yard went on strike. That evening thousands gathered in protest outside the Town Hall in Euston Road and the next day the Home Secretary banned all demonstrations. Don and Edie were re-housed at Grafton Road, which is where our picture shows then in 1962.

In September 2011 a bench in St Martin's Gardens in Camden Street was dedicated to Ellen Luby who died in 2010. She was renowned for her work during the rent strike.

This section lists the memorials where the subject on this page is commemorated:
Don Cook

The ecclesiastical governing body of Westminster Abbey is the Dean together w...