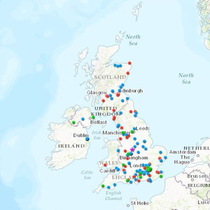 MP and Prime Minister in the 1830s and 40s. Reorganised the London police for...

In 1893 the Acting Superintendent of the old Snow Fields Ragged School.