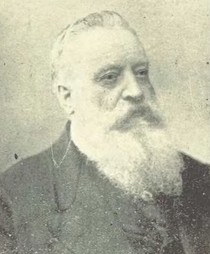 James Gallaher was born near Londonderry, Ireland, in 1829 and married Elizabeth in Larne, Ireland in 1853. He travelled with his wife and two young sons to London in 1856 where he gained employment with a wholesale grocers. In 1862, James Gallaher moved out of central London to Leyton, and quickly established himself in the then small rural community. Utilising experience gained working for the wholesale grocers for almost 20 years, he began his own successful fruit importing business around 1873, which was to become a family run business, and continued after his death.

In 1894 he was Chairman of the Freemen's Orphan School, and also had representations as a Governor of St. Thomas's Hospital, The Irish Society, The London Chamber of Commerce, the West Ham Park Committee, and a member of the Bridge House Estates Committee. Having a strong interest in astronomy and mathematical sciences he became a Fellow of the Royal Astronomical Society in 1891. And in 1895 he qualified as a Justice of the Peace for the County of Essex, which was made a permanent commission upon his retirement from Council.

James and his wife had eleven children in total (six males, five females), of which the majority were born in Leyton. James Gallaher died in Leyton on 11 December 1896, and his wife Elizabeth died soon after in 1898. They are buried together in St Mary's Parish Churchyard, Leyton. With thanks to D. Booth - Leyton Historical Society.

This section lists the memorials created by the subject on this page:
James Gallaher, FRAS