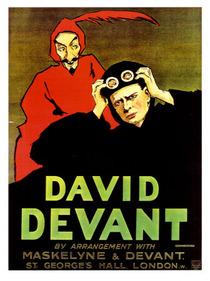 Born 4 Boston Terrace, Holloway, as David Wighton.  His stage name was taken from the title of a painting ‘David devant Goliath’ (David before Goliath), and was first used, aged 17.  Married his, no doubt beautiful, assistant in about 1888.  Had a long and successful partnership with Maskelyne who had been one of his early inspirations. 1905 – 1915 they performed at St George’s Hall, next door to the Queen’s Hall.   One of the first to recognise the potential of the Lumières’ 1896 demonstration in London of moving pictures.  First president of the Magic Circle in 1905.  Appeared in the first royal command variety performance in 1912.  Died at the Royal Hospital for Incurables, Putney, from a progressive palsy which had caused him to retire from public performing in 1919.

This section lists the memorials where the subject on this page is commemorated:
David Devant

The theatre was opened by Herbert Beerbohm Tree and it originally produced pl...