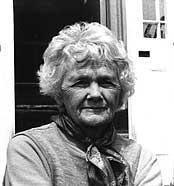 Born as Frances Eliza Hodgson in Cheetham Hill on the edge of Manchester on 2...