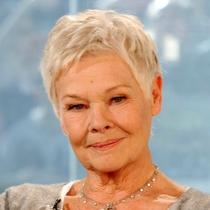 Actor. Born Judith Olivia Dench in Heworth, York. Made her stage debut with the Old Vic company in 1957. Over the decades, she has performed with the Royal Shakespeare and the National Theatre companies.
Although she hadn't appeared in a singing role before, she was cast as Sally Bowles in the 1968 London production of 'Cabaret'. On television she was in the sitcom 'A Fine Romance' with her husband Michael Williams. Later in life, she has had great success in the cinema, particularly being cast as 'M' in the James Bond series. Although nominated for many Academy awards (mainly in leading roles), she eventually won Best Supporting Actress for her performance as Queen Elizabeth I in 'Shakespeare in Love', which at about eight minutes long, is one of the shortest Oscar winning roles.
She has been afflicted with the eye condition 'macular degeneration', which requires scripts having to be read to her.
She was appointed OBE in 1970, DBE in 1988 and a member of the Order of the Companions of Honour (CH) in 2005.

This section lists the memorials created by the subject on this page:
Dame Judi Dench, CH

Film producer. Born Sandor Kellner in Hungary. In 1933 had a big success with...