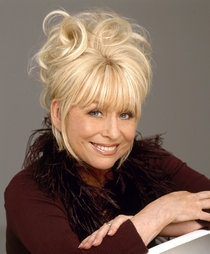 Actor. Born Barabara Ann Deeks in Shoreditch. She made her west end debut in 1952, before joining Joan Littlewood's Theatre Workshop. In the cinema she was a regular in the 'Carry On' series, appearing in nine of the films. On television she was part of the original cast of 'The Rag Trade' and most famously was cast as Peggy Mitchell in 'EastEnders'. She is believed to have had relationships with both the Kray brothers. In May 2018, her husband revealed that she had been diagnosed with Alzheimer's disease, and that there were times when she no longer recognised him.

This section lists the memorials where the subject on this page is commemorated:
Dame Barbara Windsor

This section lists the memorials created by the subject on this page:
Dame Barbara Windsor