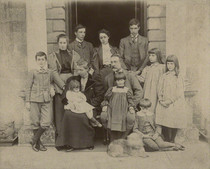 Daniel Meinertzhagen VI. Head of the Frederick Huth merchant bank, as his father had been before him. Treasurer of the committee that built the extension to the German Hospital, which, given his wealth, probably means he largely funded it. Died Hampshire.

Andrew Behan has researched Meinertzhagen: Daniel Meinertzhagen was born on 28 October 1842 at 28 Devonshire Place, Marylebone, the eldest son and the fifth of the eleven children of Daniel Meinertzhagen and Amelia Meinertzhagen née Huth. His father had been born in Bremen, Germany, but who had become a British subject in 1837, was a merchant and became a senior partner in the banking company Frederick Huth & Co. His mother, the daughter of Frederick Huth, had been born in Islington. He was baptised in the Parish of St. Mary-le-Bone on 9 August 1843. The 1851 census shows the family still living at 28 Devonshire Place together with a governess, a nurse, a nursemaid, a cook, a housemaid, a kitchen maid, a footman and a dressmaker.

When his father died in 1869 he took over as the senior partner in the banking firm of Frederick Huth & Co. On 11 September 1873 he married Georgina Potter in the Parish Church of Standish in Gloucestershire, the ceremony being performed by Richard Harvey, the Canon of Gloucester. At the time he was living at St James's, Westminster and she resided at Standish House, Standish.

The 1881 census confirms the family lived at Wallop House, Nether Wallop, Stockbridge, Hampshire and the 1891 census shows them residing at Mottisfont Abbey, Mottisfont, Hampshire, a property that has been in the hands of the National Trust since 1957. He was renting the property from the Barker-Mill family and the census shows that in addition to his family there was also a school governess, a butler, two footmen, a nurse, an under-nurse, a cook, three housemaids and two kitchen maids. Additionally there were three grooms living in The Stables.

By the time of the 1901 census the family home was Longfords House, Minchinhampton, Stroud, Gloucestershire.

This section lists the memorials where the subject on this page is commemorated:
D. Meinertzhagen