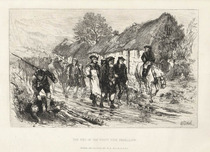 3,470 prisoners were taken, men women and children, and it was decided that they should all be tried in England.  Seven ships carried them from Inverness on 10 June 1746.  Their destinies were various:  Many were eventually released but 116 commoners were executed at Carlisle, York and Kennington Common and 4 lords at Tower Hill.  Others were transported to the colonies, banished to a country of their choice, escaped or died in prison.  On 11 August 268 prisoners were landed at Tilbury Fort and imprisoned there.  Others were held in prison ships on the Thames nearby.  Only 1 in 20 of the Tilbury prisoners were tried, selected by lottery.  Meanwhile the prisoners were available for viewing by paying sight-seers who came via the river from Westminster.  The last Tilbury Fort prisoner was eventually released sometime after January 1750.

The four lords executed at Tower Hill were: Kilmarnock & Balmerino, Lovat and George Earl of Cromartie for whom we have not found a memorial. The Newgate Calendar reports on the executions.

This section lists the memorials where the subject on this page is commemorated:
Culloden - prisoners

This granite stone was recovered from Culloden Moor, site of the battle. We v...

Albert Woodfox is an American known as one of the Angola Three (Robert King, ...