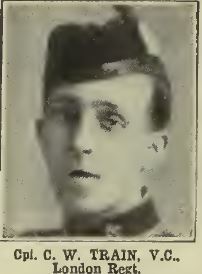 On 8 December 1917 at Ein Kerem, near Jerusalem, in Ottoman controlled Palestine, when his company was unexpectedly engaged at close range by a party of the enemy with two machine-guns and brought to a standstill, Corporal Train on his own initiative rushed forward and engaged the enemy with rifle grenades and succeeded in putting some of the team out of action by a direct hit. He shot and wounded an officer and killed or wounded the remainder of the team. After this he went to the assistance of a comrade who was bombing the enemy from the front and killed one of them who was carrying the second machine-gun out of action.

This section lists the memorials where the subject on this page is commemorated:
Corporal Charles Train VC

{Below an image of a Victoria Cross medal:} Corporal Charles Train, London Re...