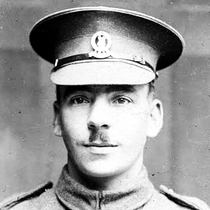 Soldier. Charles Ernest Garforth was born in Willesden Green. He was a corporal in the 15th (The King's) Hussars. On 23rd August 1914 at Harmingnies, France, he cut wire while under fire, enabling his squadron to escape. On the 2nd September, he extricated and carried to safety, a sergeant who was lying under his dead horse. The next day, when another sergeant had lost his horse, he drew off the enemy fire and enabled the sergeant to get away. For his actions, he was awarded the Victoria Cross.

Kilburn Times have a photograph of Garforth in later life.

He died, aged 81 years, on 1 July 1973 from natural causes at 5 Lock Close, Ryland, Beeston, Nottinghamshire and his ashes were scattered at the Southern Cemetery and Crematorium, Loughborough Rd, West Bridgford, Nottingham, NG2 7FE.

This section lists the memorials where the subject on this page is commemorated:
Corporal Charles Garforth VC

This stone was laid exactly 100 years to the day from his first act of bravery.