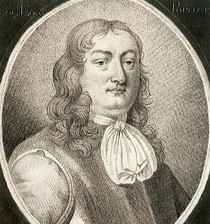 Already a naval lieutenant, he, with his two brothers, supported Cromwell and served as a colonel in the new Model Army. MP for Minehead. Died Dover and was buried Westminster Abbey, where there is still a grand marble monument but without inscription.

When Charles II was restored to the throne he ordered the disinterment of the bodies of Oliver Cromwell and his supporters, including Popham, and their reburial in an unmarked pit in St Margaret's churchyard, Westminster. However Edward's brother, Alexander, an MP, was allowed to take Edward's body for a respectful burial elsewhere. It was also at this time that the monument was moved from the prestigious Henry VII's chapel to the lesser chapel of St. John the Baptist and the inscription panel replaced with a blank.

This section lists the memorials where the subject on this page is commemorated:
Col. Edward Popham

Trained linguists for covert work, mainly with Russian during the Cold War. ...

The battle was the turning point of the Japanese U Go offensive against Briti...

A guild of knights, whose role may have been to defend London from attack fro...