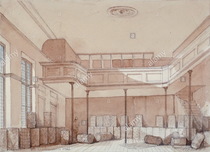 The Worshipful Company of Coachmakers and Coach Harness Makers received their charter in 1677 and initially did not have a hall of their own.

Following the Great Fire the Worshipful Company of Scriveners built their hall in Noble Street and used it themselves until 1703 when they sold it to the Coachmakers, who rebuilt it in 1843 and in 1870. Finally it was destoyed by bombs in WW2.

The image shows the 1851 interior. British History Online have a pre-1929 photo of another part of the hall but we cannot find an image of the exterior.

This section lists the memorials where the subject on this page is commemorated:
Coachmakers' Hall

First recorded in 1375 as the Guild of St. James, Garlickhythe, the Worshipfu...

Tallow chandlers make candles and other products from animal fat.  the Compan...

Destroyed in the Great Fire and never rebuilt. 'Upholder' is an archaic word...