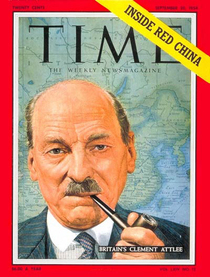 Politician. Born Clement Richard Attlee at Westcott, 18 Portinscale Road, Putney. In 1919 he became the first Labour mayor of Stepney and entered parliament in 1922. He served as Dominions Secretary and Deputy Prime Minister in Churchill's war cabinet. His party swept to power in the 1945 general election, and his tenure as Prime Minister saw the introduction of the National Health Service and the nationalisation of many industries. Retired from politics in 1955, and elevated to the peerage as Earl Attlee of Walthamstow. Died in Westminster Hospital.

Attlee was considered a dull man lacking all charisma. Churchill is often credited with the quips: "An empty taxi arrived at 10 Downing Street and Clement Attlee got out", and "Attlee is a modest man who has much to be modest about."

This section lists the memorials where the subject on this page is commemorated:
Clement Attlee

Conservative politician. Wikipedia has the wonderful phrase "In 1947, he succ...