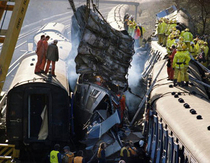 At 8.10 a.m. a crowded passenger train from Basingstoke heading for London Waterloo, crashed into another train that had stopped at a signal. A further empty train travelling in the opposite direction crashed into the debris of the first collision. Thirty-five people were killed and about five hundred injured. Many passengers were helped to safety by the staff and pupils of the nearby Emanuel School. In the subsequent inquiry it was found that recent re-wiring work on the signalling system had been botched, allowing the train to go through a signal that should have been showing red.

This section lists the memorials where the subject on this page is commemorated:
Clapham Junction rail disaster

Car bomb planted by the IRA in Hans Crescent, killed 3 police officers and 3 ...