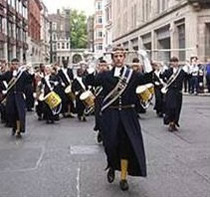 Founded by Edward VI in the remains of Greyfriars Monastery for the education of poor children. The first pupils arrived in November 1552. In 1682 Sir Robert Clayton erected much of the building, designed by Wren, together with a statue of Edward VI.  Popularly known as The Bluecoat School where Charles Lamb was a pupil. Moved from the City of London to Horsham in 1902, and at the same time the boys' preparatory school also moved from Hertford to Horsham. The girls' school remained at Hertford until 1985, when it also moved to Horsham.  Part of Wren's building, the passage entrance, and the statue of Edward VI were incorporated into the Horsham building.

This section lists the memorials where the subject on this page is commemorated:
Christ's Hospital

Created by a gift of land by Sir William Harpur to the corporation of Bedford...

2012 and the school is a primary school only, and in our experience primary s...

The museum is located on land that until 1970 was part of the Surrey Docks. A...