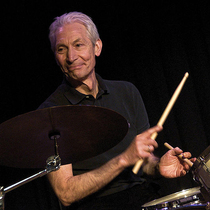 Drummer. Born on 2 June 1941 as Charles Robert Watts in University Hospital. He was given his first drum kit in 1955. In 1961 he met Alexis Korner and joined his band 'Blues Incorporated'. He was introduced to Brian Jones, Mick Jagger and Keith Richards in 1962 and joined The Rolling Stones group the following year.

Music Heritage has provided an interactive map of the Rolling Stones in London.

He died, aged 80 years, on 24 August 2021 in a London hospital. His Wikipedia page and obituary give much information about this man.

This section lists the memorials created by the subject on this page:
Charlie Watts

Kool and the Gang

Singer. Born in Dagenham. He became lead singer with the Tremeloes (originall...