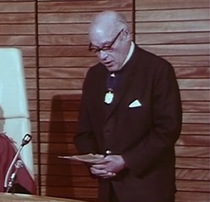 Alderman Charles Stenhouse. Mayor of Harrow in February 1969. Our image is a screen grab from a video at London's Screen Archives showing Stenhouse in 1975 officiating at a rather dull presentation ceremony.

Our colleague Andrew Behan has kindly researched this man: Charles Edward Stenhouse was born as Charles Edward Steinheim on 28 May 1910 in London, the younger son of Alfred Steinheim and Florence Steinheim née Sacke. His father was a Soap Manufacturer who originated from Bielefeld, Germany and who became a British Naturalised Subject in 1904. His mother had been born in Kimberley, South Africa. The 1911 census shows the family living at 124 Elgin Crescent, Notting Hill. On 10 April 1924, when living at 106 Greencroft Gardens, Kilburn, both he and his elder brother, Arnold Bernard Steinheim, changed their surname to Stenhouse. Electoral registers from 1932 to 1937 show him still living at 106 Greencroft Gardens with his brother and parents and these confirm that his parents retained their surname as Steinheim.

In 1937 he married Josephine Hannah O'Callaghan in Marylebone and they had two children, Susan P. Stenhouse, born 1939 and John A. Stenhouse, born 1942. The 1938 electoral register shows him and his wife living at 52 Herga Court, Sudbury Hill, Harrow. On 24 March 1939 they embarked on the Nederland Line ship 'Johan van Oldenbarnevelt', bound for Genoa, Italy and returned from there arriving back in Southampton on 17 April 1939 on the 'Marnix van St Aldegonde', another ship owned by the same company. The 1939 England and Wales Register shows them still at 52 Herga Court and his occupation was a Director of Soap Manufacturer. He is also recorded on this register as a 'Vol. Squad Driver, Harrow U.D.C. 1st Aid Party'. Electoral registers from 1947 to 1955 show the family living at 'Forres', Orley Farm Road, Harrow and and from 1956 to 1965 at Roselyon, Mount Park Road, Harrow.

He served as a councillor in the Municipal Borough of Harrow and continued as such when it became the London Borough of Harrow, where he became the Mayor for the year 1968-1969. He died, aged 73 years, on 26 February 1984 and probate records show his address had been The Hut, Mount Park Road, Harrow and that his effects totalled £133,418.

This section lists the memorials created by the subject on this page:
Charles Stenhouse