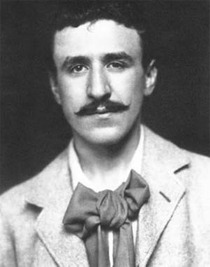 Born 70 Parson Street, Glasgow. Architect, designer and watercolourist. He was a designer in the Arts and Crafts movement and the main exponent of Art Nouveau in the United Kingdom. Married Margaret MacDonald in 1900. Designed a few buildings in and near Glasgow, including in 1909 the Glasgow School of Art (where he had studied). Sadly, when he left Scotland in 1914 his architectural career was largely over: he was depressed and alcoholic, and the war meant very little was being built. He spent some time in Walberswick painting some delightful flower studies.

In London (1915-23) he produced fabric designs and, 1920-21, he was close to taking on the Mystery House as a project (info at Cheyne House), but it was not to be. He moved to France where he continued painting. Seriously ill he returned to London in 1927 and died at 26 Porchester Square. In his lifetime he was appreciated in Germany and Austria, but not in Britain.

This section lists the memorials where the subject on this page is commemorated:
Charles Rennie Mackintosh

Henrietta Barnett formed a board of trustees to build this urban utopia follo...