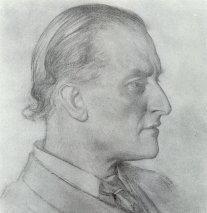 Architect and designer. Born near Hull, Yorkshire. Influenced by William Morris, his early work included the design of wallpaper and textiles. His designs for houses became very influential on domestic architecture in the 1920s and 1930s. Died Winchester, Hampshire.

From the Bedford Park panel: "Voysey was one of the most significant architects of the Arts and Crafts movement, and lived in Bedford Park from 1885 to 1888. The white rendered house at 14 South Parade which he designed in 1890 for the artist J. W. Foster was apparently intended 'as a protest against the bland red brick of the rest of the suburb'. The design provoked criticism at the time, although it is now generally regarded as an outstanding example of Arts and Crafts architecture. Voysey also designed the Sanderson’s wallpaper factory (1902) in Barley Mow Passage off Chiswick High Road."

This section lists the memorials where the subject on this page is commemorated:
Charles Francis Annesley Voysey

This section lists the memorials created by the subject on this page:
Charles Francis Annesley Voysey

Royal Palace. Records of the time indicate that the Black Prince was building...

Henrietta Barnett formed a board of trustees to build this urban utopia follo...