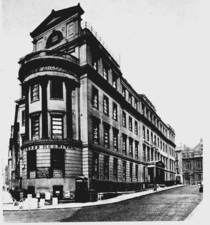 This hospital was established in 1818 in Suffolk Street as the West London Infirmary and Dispensary. 1821 moved to Villiers Street, becoming known as Charing Cross Hospital in 1827. A new building was opened in Agar Street in 1834 and was extended several times. In 1928 it expanded into the next-door building when that was vacated. It moved out to Fulham in 1973.

Note: 2019 Wikipedia have a drawing of this building, incorrectly captioned as being in Villiers Street.

This section lists the memorials where the subject on this page is commemorated:
Charing Cross Hospital

We love the repeated "etc."s to indicate the Duke's excessively long list of ...

Thanks to our colleague Alan Patient for providing this photo.