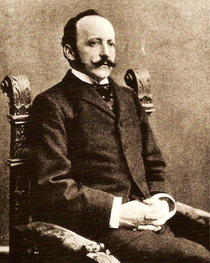 Hotelier.
Born Switzerland, son of a peasant farmer. Started work as a waiter and worked his way up, in Paris, Vienna, Lucerne, etc. Came to London in 1889 as the manager of Richard D'Oyly Carte's Savoy Hotel from which he was sacked in a financial scandal which was hushed up. He left to set up his own chain of hotels, starting in Paris. Called "hotelier to Kings and King of hoteliers" by Edward VII, a regular customer.
In 1902, having planned elaborate festivities to coincide with the coronation of Edward VII, he suffered a serious breakdown when this event was indefinitely postponed due to the King's ill-health. Died in hospital in Switzerland.

This section lists the memorials where the subject on this page is commemorated:
César Ritz

See The Ritz for pictures of the building being erected.

We cannot discover who or what Lenthal(l) is/was but apparently it Works.