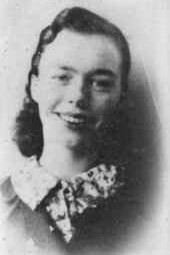 From 1933 to 1938 her parents were shown on electoral registers at 38 Wilmer Gardens, Hoxton, but although they were still there on the 1939 England and Wales register, she is not listed at this address.

On 23 September 1941 she gave birth to her daughter, Gloria Caroline Holmes at St Martin's Hospital, Bath, Somerset. On her daughter's birth certificate she is shown as Mabel Caroline Holmes formally Farmer residing at 9 Barrow Road, Bath. The child's father was recorded as James Robert Holmes, a Gunner in Royal Artillery, service number 1476811. However there is no trace of any marriage to him and he was still married to a Mabel Holmes née Tait (b.1908) with whom he had three children: Robert Holmes (1931-2010), James Ronald Holmes (1932-1933) and Joan Florence Holmes (1934-1944).

She died, aged 22 years, on 19 February 1944, together with her daughter, her partner and her partner's other daughter, at their home at 116 Shaftesbury Street, Hoxton, as a result of enemy action. They were buried together on 25 February 1944 at Chingford Mount Cemetery, 121 Old Street Road, London, E4 6ST.

She is also commemorated as Caroline Holmes, together with the other three, in the Civilian War Dead Roll of Honour that is kept just outside St George's Chapel at the west end of Westminster Abbey.

This section lists the memorials where the subject on this page is commemorated:
Caroline Holmes

Portrait painter, collector and President of the Royal Academy