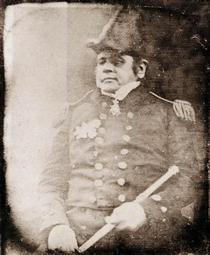 Born Lincolnshire. Royal Navy. Governor of Tasmania 1836-43. where there is also a statue. Left England in 1845 leading an expedition of 2 ships, HMS Erebus and HMS Terror, to voyage the last unnavigated section of the North-West passage (across the Arctic, north of America). The expedition was lost and so is only erroneously credited with the discovery of the North-West Passage.

After two years his wife, Jane, became determined to discover the fate of the expedition devoting her energies and her funds to a total of 7 expeditions, the last being in 1875. Bellot lost his life on one of these trips. The search for and investigation into the remains of the expedition continued into the 1980s (36 search expeditions in all) and eventually concluded that they all died of: hypothermia, starvation, lead poisoning, scurvy, exposure, inadequate equipment and provisions. Knife marks on human bones prompted suggestions of cannibalism. The press of the day presented this as a big success and Franklin as a hero. Those Victorians, eh?

2018: The Guardian reported the death of Louie Kamookak, the Inuit historian, without whose tireless researches the remains might never have been found.

This section lists the memorials where the subject on this page is commemorated:
Captain, Sir John Franklin

{On the front of the plinth:} To the great arctic navigator and his brave co...