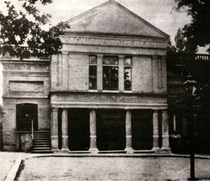 A popular venue for plays and concerts, performed by local drama and music societies. until it was destroyed by fire. The name derives from the nearby Bycullah estate which was developed from 1879, and named after a suburb of Bombay (Mumbai).

The magnificent Edith's Streets tells us that the Bycullah estate acquired its exotic name because the park’s owner, Riddell, had married an Indian princess. The park was bought by Cullodon Rowan in 1879 for development.  Also that in WW1 the theatre was used by Klinger for war work.

This section lists the memorials where the subject on this page is commemorated:
Bycullah Athenaeum