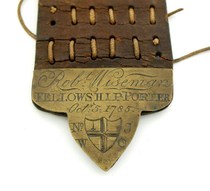 Waymarking says this "It was the home of the Fellowship Porters who, towards the end of their existence as a Company, seem to have transacted their business at 22 Beer Lane.  They were formed of two classes, tackle-porters and ticket-porters, having been united and constituted a brotherhood in the reign of James I, recognized as such by the Court of Common Council in 1646, and further regulated by that body in 1848. They were managed by a Governor, who was always the Alderman of the Ward of Billingsgate, and by a Court of Rulers. Their business was that of unshipping, landing, and housing various kinds of goods, and carrying corn, salt, coals, fish and fruit of all descriptions. Each ticket-porter used to wear, when at labour, a metal badge or ticket, inscribed with his name and number as registered.  The Fellowship Porters' Hall was bought by the Watermens' Company, and was used for business purposes."

Rootsweb says: "The Corporation of London appears not to have liked the society, which appears to have been a mutual help organisation and a union rolled into one and over a period of years passed many acts restricting the society's powers. The society was finally disbanded by an Act of the Corporation, Court of Common Council in 1894. The Hall in St Mary-at-hill was sold."

It is thought that the term 'Porter' for strong dark ale comes from its popularity with these workers.

The auction item in our picture is, we think, an original badge, or 'ticket' worn by a porter to prove that he was entitled to carry out the work.

This section lists the memorials where the subject on this page is commemorated:
Building of Fellowship Porters Hall