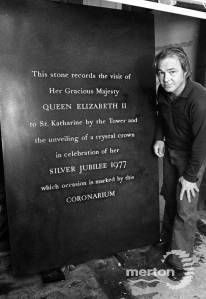 2015: Niedbala’s son, Marek, wrote to say that “When WWII started he was taken to a Russian work camp in Siberia then spent the duration in refugee camps in Persia & Rhodesia before arriving in the UK in Wrexham, where he studied & gained his Art diploma. In the late 50s moved to London & taught Art in Brixton before settling on a career as a Lettercutter/stone mason. In the mid late 60s early 70s was president of the LetterCcutters Association. Sadly he died in 1987 through alcohol related problems and internal bleeding. Such a waste of talent as his work/style of lettering was considered amongst his contemporaries to be the finest and most beautiful. He created numerous works throughout London. I remember him carving the lettering on the plinth upon which Charlie Chaplin stood in Leicester Square, also the plaque for Tamara Karsavina which is in St Pauls Covent Garden. He was commissioned to carve numerous plaques for buildings, new hospital wings opened by members of the Royal family.

Telephone directories from 1973 to 1976 list him as a lettercutter at Goods Yard, Morden Road, Mitcham and from 1977 to 1979 they additionally listed his home address as 263 Commonside East, Mitcham. From 1980 only the 263 Commonside East address was shown.

His death, aged 51 years, was registered in May 1987 in the Wandsworth registration district and he was buried on 3 June 1987 in Merton.

This section lists the memorials created by the subject on this page:
Bronislaw Wojciech Niedbala

Sculptor.  Born Norwich.  Professor of sculpture at the Royal College of Art,...