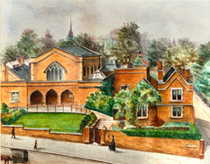 From the picture source website: "The Jerwood Medical Education Centre was de...

Founded by W. F. R. Stanley as the Stanley Technical Trade School. It was tak...