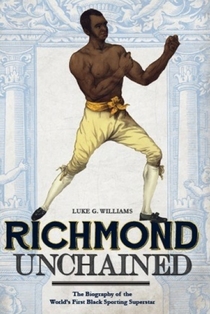 Boxer. Born a slave in Richmondtown, Staten Island, New York. He become a servant of Hugh Percy, 2nd Duke of Northumberland, a lieutenant-general in the British army, and it is presumed that he became a free man at this point. He moved to Britain in 1777 and, aged 40, took up bare-knuckle boxing. After a successful career, including an invitation to the coronation of King George IV, he became good friends with Tom Cribb. Died while visiting Cribb in his pub The Union Arms (now the Tom Cribb public house).

At the unveiling of the plaque Richmond’s biographer, Luke G. Williams, said that "Richmond was the first sports star of African heritage".

The New York Times wrote that Richmond had been buried in St James Chapel graveyard, beside Euston Station and that during the excavations associated with HS2 archaeologists had hoped to find his remains. We know they found Flinders' remains but we can find no report that Richmond's were found so we presume they weren't.

This section lists the memorials where the subject on this page is commemorated:
Bill Richmond

One of the world's most famous civil rights activists, A Baptist minister, he...